The recent interface changes on facebook (in one word: boo) have led me to re-evaluate my own addiction use of this social network. In fact, I am seriously considering completely kicking the habit. But while I continue evaluating and considering, I can't help but find the use of facebook a rather fascinating phenomenon. Why? Well, let me first share three updates from facebook friends of mine (hope you don't mind guys), posted within the past 3 months. Yes, I have blanked out their names, but no, I have not manipulated the contents: these postings are real.


First, a friend who had a baby, posting a poll to help decide what name she should give him:

Don't know if she actually used the results, but still.

Second, a (relatively newly-wed) friend who used facebook to announce:

followed shortly after by this status change: 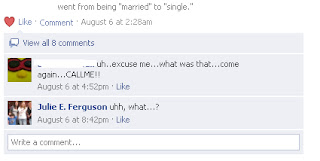 And third, several cousins mourning the death of our great aunt on fb, before the news of her passing had even been properly communicated to us all. To which another cousin lamented (quite justifyably imho):

Soliciting baby name suggestions, announcing divorces, and even deaths, all on facebook... I just found it kinda, well, bizar.

So what it is that causes people to post such major, personal events on something that is actually so impersonal as facebook? Yes, okay, it is a form of social media, so a form of sociality is to be expected. But were people always so open in disclosing the most personal details of their inner life, and did we just not see it before we had fb? Or has everyone simply given up on privacy?

A study by a colleague of mine showed that people tend to disclose more about themselves when communicating anonymously eg. during chat sessions with unknown 'friends' on msn. This corresponds to other studies I've seen on media such as blogs and twitter, which are used for highly personal purposes such as self-reflection, but which - paradoxically - are at the same time open for viewing by a potential audience of millions (I mean, how awesome is this title: "Blogging as social activity, or, would you let 900 million people read your diary?").

When searching google scholar for 'facebook', the first listing (among 2 million results!) is the 2007 article by Ellison & Steinfield (already cited >1000x, and solely responsible for substantially increasing the publishing journal JCMC's impact factor). They analyzed the use of facebook among college students, developing the wonderfully-named and oft-used 'facebook scale' to measure how facebook impacts on people's social capital. They found that people with a relatively high sense of well-being tended to use facebook a lot, and - extending this finding - suggest that facebook can have positive effects for people with lower life satisfaction.

So how do these empirical (n=1) and theoretical findings reflect on my own facebook affliction? Who actually are my fb friends? They're not completely anonymous, no, they're often not really our friends IRL either, right? On my modest fb network (of ca. 150), the people I interact with most are my sisters and a handful of my close friends and cousins, but other than that: it's mostly - and intentionally - weak ties: people I would otherwise rarely interact with because they live really far away, or I just don't really know them that well.  Nonetheless, I know them well enough for them to provide a great source of comfort and entertainment on fb.

Then maybe that's the key: fb is a safe place, comprising 1) people whose judgment you don't care about that much because you don't really know them anyway, but who are available to provide feedback - so you can share pretty much anything without it negatively affecting you. This then would be in line with Schouten et al.'s study, that anonymity strengthens self-disclosure; Or is it that fb comprises 2) people who's judgment you do care about, but who you've friended because they also care about you, and are therefore likely to give you real positive reinforcement, in line with Steinfield's study.

Either way, it's a win-win: anonymous enough to feel safe about disclosing personal details, but not so anonymous that no-one cares.Well, whatever it is, I'm clearly not ready to kick the habit quite yet.


***
[update 27 sept. 2011] subscript
To add to my collection of remarkable facebook posts: a US wedding, keeping European friends (real & virtual) updated via fb... Ok so it was a wedding between 2 'internet gurus', but still...
Posted by juulferg at 6:18 AM