Group dynamics, through the barrel of a paintball gun 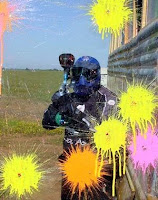 My younger sister invited me for a day out with her sorority. Approximately 20 young ladies, plus their assorted brothers and sisters (me included), assembled in Rotterdam, filled with anticipation as to what the day would bring. Not easy to come up with a 'fun activity' that is suitable for a group so large and diverse. Paintball it was!

Picture the situation: around 25 sorority girls, plus approximately the same number of brothers and sisters. Divide them into 2 groups: the sorority girls on the one side, the brothers and sisters on the other. The sorority girls see each other at least twice a week, have passed through an initiation (or 'hazing') period together, and share a strong bond through their membership of and emotional affiliation to their joint sorority and student club. In other words, they form a formal network, characterized by strong ties. The brothers and sisters on the other hand, had never seen each other before; the only tie they had to each other was their shared paintball adversary, namely the group of sorority girls. I.e., the siblings weren't even a network, just a gathering of people grouped together by chance, and characterized by weak ties, if any.

So: which team is going to do better? The cohesive group of sorority girls, or the gathering of random brothers and sisters?

The answer? No, not the sorority girls!! In fact, we kicked their sorry student asses FOUR times in a row, hands down (or, to maintain the paintball analogy: hands up). In other words, while you (or at least I) would expect a strong network to contribute to far better performance, the contrary was in fact the case. More specifically: the sorority girls sat quiverring behind their obstacles at the back of the paintball field like a bunch of scared deer caught in the headlights, launched very few strategic attacks, and basically completely sucked at paintball. The group with no ties whatsoever actually showed far better strategic ability, rushing forward into enemy territory like rambo on red bull, taking much greater risks, and performing far better, both individually and as a group.

So there you have it: theory on the strength of weak ties* prevails again, and the adage 'birds of a feather flock together' is empirically strengthened. However, the correlation between relational embeddedness as a postive influence on performance seems to be disproven - at least in a paintball setting!

Okay, so before my colleagues Agterberg et al. (2010) shred their A-rated journal publications which emphasize the importance of precisely this relational embeddedness on group performance, let me add a few caveats to my 'research findings': a) perhaps their being sorority chicks and drinking great quantitites of beer influenced their (dismal) performance; b) perhaps the girls would have improved over time and the cohesion which was initially their downfall, would have become their strength (although, come on, 4 times? how many times do we need to play?); c) perhaps the brothers and sisters were simply all particularly talented paintball players; or d) perhaps all that sibling rivalry just happened to coalesce at the same time - although why would this only be manifest in the one group rather than the other? Because we were categorized as 'siblings', and they as 'sorority girls'?

But either way: this clearly calls for more experimental field research in the paintball field, more research among sororities and sibling groups, and on a more personal level... less time spent thinking about my work, even while in a war zone, on a day out with my sister...!

SPLATT!
* A more scientific explanation﻿ of this phenomenon explained in layman's terms: innovation on broadway blog by @digitaltonto
Posted by juulferg at 4:52 AM